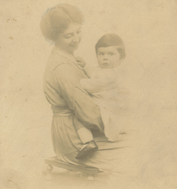 David with his mother Muriel
David Stamford Ballantyne was born in Camberwell, London, on 1st October 1913. He was the first child of Muriel Taylor and the Rev. John C. Ballantyne, then Minister of a Unitarian chapel in Stamford Street, just south of the River Thames, whence his middle name.

John C. Ballantyne had received a sound classical and scientific education at Glasgow University, where one of his teachers was Lord Kelvin, then Professor of Natural Philosophy. John had started his working life in London as assistant to his eldest brother, Horatio Nelson Ballantyne, an analytical chemist. Unfulfilled in his scientific life, and tempted to join the ministry of the Unitarian church of which he was already an active member, he joined a three-masted schooner bound for Australia, by way of the Cape of Good Hope, to clear his mind and help him decide his future. After returning to England, he decided to devote his life to the church, and subsequently studied theology at Manchester College, Oxford. 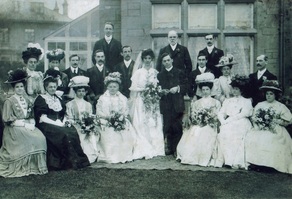 The wedding of John Ballantyne and Muriel Taylor
David's mother Muriel was the middle of three daughters of Alfred Taylor, Managing Director of the Bath and Portland Stone Company. He and his wife Jennie were regular worshippers at the Unitarian chapel in Trim Street, Bath. Muriel Taylor spent her childhood and early adult life in their beautiful home in Bath, where she was encouraged to do most of the things expected of Victorian young ladies of means.

She studied drawing, painting and leatherwork at the City School of Art, whose principal was a certain Mr. Harbutt, inventor of 'plasticine'. She also learned to play the piano, violin and 'cello; she did the 'Grand Tour' around the artistic centres of Italy with a companion whom she referred to as 'Madame Pelenghi', from whom she learnt moderately fluent Italian.

She also devoted considerable time in her youth to the Unitarian Sunday School movement, and it was at one of their meetings in Oxford that she met her future husband, whom she married in Bath in 1908.

From left: Rollo, John, Jean (the triplets) and David
Shortly after the outbreak of the First World War in 1914, John, Muriel and David moved to Nottingham where, almost exactly four years after his own birth, his triplet siblings  John, Rollo and Jean were born, in 1917.

Early in 1918, the family moved to Liverpool, where Rev. John C. Ballantyne took up the post of minister to the Liverpool Domestic Mission in Mill Street, Toxteth, the Unitarian mission to the Liverpool docks (housed in a building, later demolished, mentioned in Pevsner’s architectural bible ‘The Buildings of England’). All four children spent their school years in Liverpool, the boys attending Camelot Kindergarten and later St. Christopher's Preparatory School, where David distinguished himself by coming consistently bottom of his class in French!

However, from the beginning, he showed an exceptional talent as a draughtsman, and from his earliest teens was chosen to paint all the posters for school plays and other activities.

The Manse, Essex Church
Although Muriel’s artistic tastes were highly conventional and quite different from David's, it was almost certainly from her that he inherited that particular talent. However it was from his father that he acquired his evangelical liberalism. John Ballantyne, who in 1935 was appointed Minister of Essex Church in London, was a respected Unitarian thinker and writer of numerous pamphlets, such as ‘The beliefs of a Unitarian’ and ‘Liberty, diversity and fraternity’.

John and Muriel’s legacy – personal commitment to others, a curiosity about the scientific world, a belief in the expression of the human spirit through music and the arts, and a political sensitivity searching for justice and inclusion – pervaded the lives of their children, and through them continues to influence the lives of later generations. 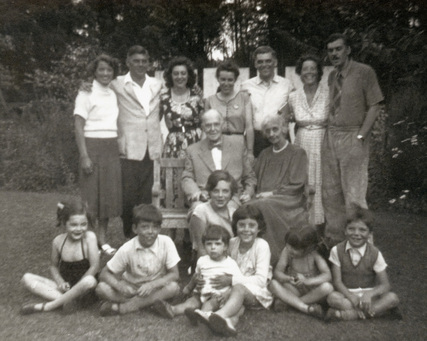