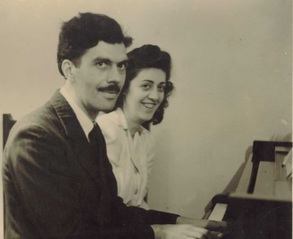 David and Jean at the piano
David’s mother, Muriel, was an accomplished pianist, cellist and violinist, and she ensured that all her children pursued a musical education.

It was in the early part of his Liverpuddlian life that David was seated firmly on a piano stool by his mother, and for the last decade or so before moving to London he was privileged to have weekly lessons from Stephen Wearing, a favourite of Sir Henry Wood.

By the time he left Liverpool at the age of 22, David was playing Chopin's fiendishly difficult 'revolutionary' study with great panache. He continued throughout his life to be an exemplary exponent of the piano works of Chopin, Brahms, Schubert and Rachmaninov in particular, practising regularly for several hours each evening. (His children and grandchildren recall drifting off to sleep to the sound of his playing, interspersed with the occasional thump on the keys, with expletive, when his fingers slipped!)

Katharine accompanying David at the piano
Later in his life, when his son Steve took up the cello, David decided to join him, and for a while they learned together.

Music was central to his family life, and all four of David and Katharine’s children were encouraged to learn at least one instrument. Covering between them the piano, violin, cello and flute, the children took part in several local music festivals and recitals.

Katharine had a good soprano voice and enjoyed singing French romantic songs (including Fauré, Debussy, Chausson, and Duparc) to David’s accompaniment; she also accompanied him on the piano when he took up the cello.

Their active encouragement of music-making spread to include their children's school friends, and later on, their grand-children.
By the early 1960s he was sufficiently excited by his salt glaze ware and his developing relationships both with students and colleagues at Bournemouth and with local musicians, to set up a group of artists, craftspeople and musicians calling themselves the 'Companions of Music and the Arts' (CMA), who held festivals showcasing their various fields of accomplishment. The first festival was held in 1962 under the auspices of the Red House Museum, Christchurch, and its then curator, John Lavender.

Another CMA festival followed in 1964, both festivals attracting the participation of locally and nationally known artists and musicians including the furniture-maker Edward Barnsley and the guitarist John Williams.
David was a fine though infrequent writer of poetry, writing mainly about his feelings for his family and for the natural world. In later life he became interested in the detective novel as a metaphor for the challenges of real life, and eventually started drafting one of his own, which remained unfinished at the time of his death.