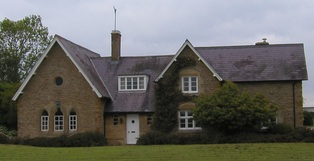 Her father’s family had been in service, while her mother came from a farming family, with origins in Warwickshire and North Devon. However both had moved away from these backgrounds; Charity into teaching and Albert into the civil service, hence their then residence near his work in London.

After falling under a tram in Croydon while cycling to work, Albert lost a finger and took early retirement to the Cotswolds, managing a smallholding in Evenlode, near Moreton-in-Marsh.

Here he earned an income from the sale of produce (cider apples, perry pears and honey) as well as keeping ducks and goats for home consumption. Charity became headmistress of Evenlode village school, where all grades were taught in two classrooms. 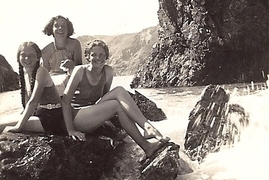 Mary, Kate and Marg, Sennen Cove, Cornwall
The Harris sisters, Margaret, Katharine and Rosemary, attended Chipping Camden Grammar School, each winning several prizes. Their mother Charity died while the girls were in their teens or early twenties, an event which deeply affected them all; the sisters remained close throughout their lives.

They learned early on to be independent (they drove themselves to school, for example, in the early days of the motor-car, before the introduction of driving tests) and, following in their mother’s footsteps, all three trained as teachers, Kate after taking a degree in French at Reading University, Margaret and Mary specializing in domestic science.

David's pencil drawing of Kate
Katharine spent a year studying in Lille as part of her degree. Her first job was teaching French at Wellingborough Grammar School, and it was here that she and David met, drawn to each other in the first instance by a shared interest in the French language and French culture.

Albert Harris was not overjoyed at his daughter marrying a conscientious objector. German himself on his mother’s side, Albert lived through the two great wars struggling to reconcile himself to his German heritage and ruing the accident that had prevented him from joining the British army himself. Yet the two men came to accept and respect each other.

After leaving Wellingborough, David and Katharine took up a joint position with Oxford House as helpers in their schools for evacuee children, until the war ended.

Katharine in her 20s
While their four children were small, Katharine left teaching for full-time motherhood, taking it up again (initially part-time) after her youngest daughter Candy started nursery school. As a French teacher she inspired hundreds of children (including her own children and grandchildren) to love the language, while also instilling a respect for its rules.

Lessons in Mrs Ballantyne’s class at Fernhill Manor School in New Milton were active and fun, yet there was no backsliding over grammar! As she described in her remarks at David’s memorial gathering, the lessons the children liked best were the ones in which she inserted (carefully rationed) stories of one Monsieur Ballantyne an absent-minded professor (alias David, of course), whose adventures never failed to arouse much laughter. 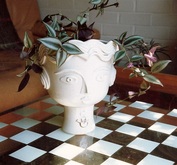 Goddess head with plant arrangement
Katharine played an active role in David’s work both as teacher and as artist. In addition to caring for their children, she gave him inspiration and encouragement, was a generous hostess to his colleagues and students, and created a home environment which became the backdrop to his pottery and design work.

Katharine had an unrivalled eye for style, much of it drawn from her experience of living in France as a student and her interest in French culture – and indeed her curiosity about other cultures generally - and David’s creativity flourished in the setting they created together. In preparation for the move to the new house in Chewton Farm Road, David and Katharine worked together to develop the design brief, and her sense of beauty, colour, proportion and utility pervaded the house throughout their time there.

As her children wrote after her death:

‘She and David together warmly welcomed friends, relatives, pupils, and our friends into a home which radiated beauty – in part the product of her own untrained but nevertheless stunning creative ability. She transformed the mundane into something special and could make magic of David's art works simply by the way she arranged them around the house, enhancing them with delicate flower arrangements, juxtaposing them with just the right lighting or companion objects.’

In later years she herself sometimes worked side by side with David in the workshop, helping with glaze mixing in particular. She always provided scrumptious tea and coffee breaks, including the ‘nasty medicine’ (chocolate bars!) to which he was so partial. As Karin Hiscock wrote to Katharine after David’s death:

‘Your own constant and affectionate support was what actually enabled him to carry out his work, and which created the special atmosphere at Highcliffe.’

David’s acknowledgement of Katharine’s significance in his life and work is evident in the songs and poetry he wrote for her. 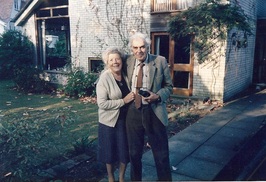 Katharine and David (1989)
After David’s death and in spite of the considerable physical effort required for the work, Katharine valiantly carried on with some of the projects he had initiated, including the manufacture of airbricks for English Heritage, spittoons for a vinyard in France, bathroom tiles, chimney bricks and several projects for Ian Hamilton Finlay. But with orders completed and increasing frailty, she died of a heart attack on 13th January 1994.