Training
He developed an abiding love of France and all things French - and came back speaking French enthusiastically, a skill which he never lost. The trip provided him with lifelong inspiration as well as a mine of stories about his adventures while living rough, including the one about their arrest for the murder of the King of Yugoslavia.

Family legend has it, that local villagers in northern France had pointed police seeking the assassins in the direction of the two students, who, having been sleeping on beaches under upturned boats, and having mistakenly bought red and blue hair dye in local shops instead of shampoo, had taken on a highly suspicious appearance! On the day in question, they returned to their lodgings to find the interior turned upside-down by a police search.
﻿
David was increasingly self-critical about his painting: though he was friendly with, and admired the work of, painters such as Ivon Hitchins, he despaired of ever developing a style of his own that satisfied him. He almost stopped painting around this time, returning to it only in the 1970's. His paintings, including this self-portrait, and the stormy landscape ‘Chalk pit with fallen tree’ painted in the early 1930’s, appear to depict a deeply introspective and conflicted young man. 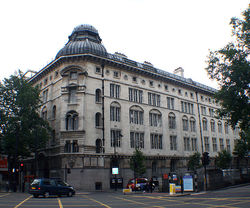