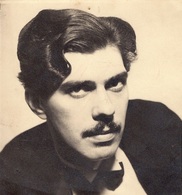 David Ballantyne in his 20's
In 1937, David began his first job, as a teacher of art at West Ham Grammar School. At the outbreak of war the school was evacuated to Felixstowe, and was later on to share premises with Wellingborough Grammar School in Northamptonshire.

Like his father, David was a pacifist, and was a member of both the Peace Pledge Union and the Fellowship of Reconciliation. When he was called up for military service in 1940 he registered as a conscientious objector. The Cardiff Tribunal, which heard his ﻿﻿submission﻿﻿, initially ordered him to undertake non-combatant duties within the army. However he successfully appealed against this, on the grounds that it was, as he later wrote to his prospective father-in-law, ‘a contradiction in terms to the principles which had brought me before the Tribunal, as I see no moral distinction between sticking bayonets in people and assisting others in some way to do it.’  The tribunal, in granting his appeal, then ordered him to stop teaching and to work 'on the land'. His first post was clearing and maintaining the waterways for the River Nene Authority; the deep respect for the natural world which he acquired through this experience was reflected in much of his later work.

In that same year David met his wife Katharine (Harris), who taught French at the same Wellingborough School. They married in 1943. In the search for an agricultural post which also gave an opportunity for teaching art, David and Kathy found employment together with the evacuated Oxford House School first in Parc Llwydiarth in Wales and then at Brampton Bryan Hall in Shropshire, where his first daughter Judy was born in 1944. Much of his free time was spent teaching art and music to the evacuees. 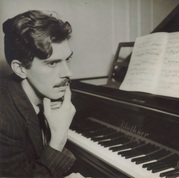 David at the piano (c.1935)
By the end of the war the pale aesthete pictured at the piano in 1935 had added to his artistic skills a love of practical labour, particularly gardening, born out of the mystical experience of planting a seed for the first time, and seeing it grow. His children and students were to benefit from this sense of wonder, which was to form a strong element of his teaching philosophy.