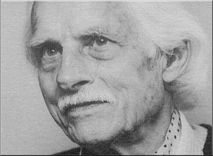 Sir George Trevelyan
While teaching at Bridgnorth Grammar School, David set up Saviac Workshops with George Trevelyan (later Sir George), the newly appointed Director of Attingham Park, an adult education centre in Shropshire for which David had been commissioned to design and print all the furnishing fabrics. His association with the Trevelyans and Attingham Park was very fruitful for both - David thinking up ideas for the college on George's weekly visits, and George giving David unfailing encouragement. The two remained lifelong friends.  George, who himself died in 7th February 1996, gave an address at David's funeral (link).

Saviac Workshops (through which David carried out all his private work from then on) aimed to offer design services of quality and integrity for any purpose, no matter how mundane or practical.

The acronym, standing for 'Striving After Values In an Age of Crisis' reflected a creative struggle (and humour) which he never gave up.

David's interest in teaching was reflected both in his work at the school, for which he made exemplary efforts (see references in panel) but also in his membership of the Workers' Educational Association (WEA), for which he spent many evenings travelling by bus throughout the Shropshire countryside to teach art appreciation to rural adults.

Many of the design themes, as well as the style, of this period reappear some 30 years later.
The original photographs of a kiln, pottery and fabrics made in Bridgnorth, including the Attingham fabrics, (links) formed part of David's portfolio for his successful application in 1950 to Bournemouth School of Art to teach pottery and fabric printing.